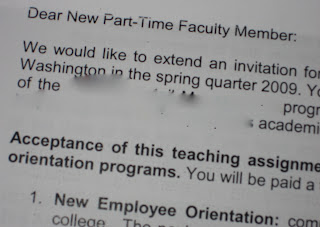 i got the official letter today. now i can shout it out for all to hear!

guess who is returning to the head of the class? 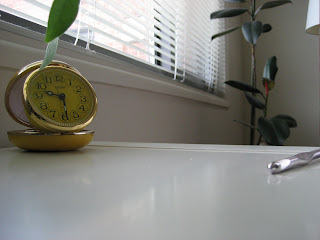 i have been crocheting.
i know! she's kicking it old school! it has been very fun, and i think i need to crochet myself some slippers.

my mum broke her wrist. please send positive thoughts/prayers/whatever in her direction so she can get back to work and back to her own knitting quickly! (hey. at least i put work before knitting there.)

this weekend rW and i started to watch Mad Men on dvd and i am rewatching with him Six Feet Under, which i adore.

clipping coupons has become very addictive, and i have two new favourite related things... Redplum and Restaurant.com. the former is good for coupons as well as free offers, tips, and suggestions. the later is better for folks in a high population density area for best selection.

and now i will say there will be few updates again for a bit because i tech a show at the end of the week.
Posted by FRM115 at 11:27 AM No comments: 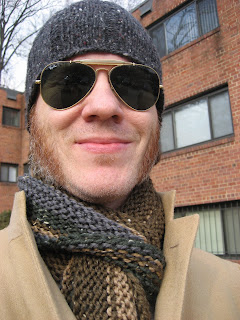 rW has it really good. i am relatively clean. i can cook. and bake. and i knit for him. here are the latest goodies....

(note: he would take exception if i did not mention that the mutton chops seen in some of these photos were a temporary involuntary facial hair style. they are no longer with us.)

i knit a black and grey version of this scarf for rW and gave it to him on our 6 month anniversary. it was the first cold day in DC. he loves that scarf and is trying really hard to wear it to death. so i made him another. this one is in colors to wear with his 1960s vintage camel dress coat and his 1970s brown leather/sheepskin mobster coat.

i like both scarves very much, but i think this one is going t hold up better for the long haul. the alpaca gets stretched out, and the wool is nicely bouncy with plenty of memory. 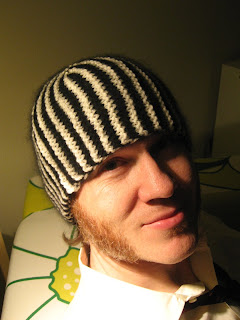 rW loves to wear a hat. he owns many caps, but he only has a few knit hats, and i think that number has dwindled since he was given his first hand knit hat. i think i am spoiling him in this regard.

after i made my angora toque, rW wanted a black and white angora sweater. i told him how crazy that idea was and he agreed a hat was a better choice. his requirements: must be black and white. must be obnoxious.

i think this fits the bill.

the hat gets fuzzier the more he wears it, and when he is out in public people often have to take a good long look at the hat. mission accomplished. 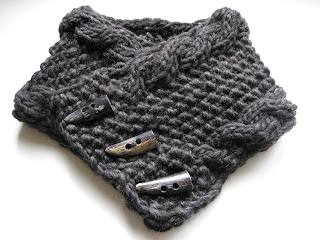 another scarf.
i was making cowls, and rW really liked them, but i needed a more manly pattern to make him something cowl-like. i think that this works well in the deep grey and the bone buttons.

rW helped me pick the buttons, and i think they are one of my favourite parts of the project. they look rustic and old. this neck warmer looks particularly good with rW's motorcycle jacket.
Posted by FRM115 at 11:01 AM 1 comment: 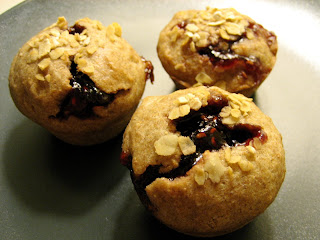 i made whole wheat muffins with raspberry jam centers. fast and delicious!

and small!
i hate those oily otis spunkmeyer muffins the size of my face. these are two bites each. yum. yum.

let's see... and now something i crocheted. yes! crocheted!

Crochet Circle Mat
aka "quick! it is cold down here!"
designed by kittything i made this to go with the bathmat i knit for rW when he moved into his new place. i picked up some more colors in the shower curtain i sewed for him and made this as the mat to step out of the shower onto. the knit guy has been transferred to the space in front of the sink .

this was super fast. literally 2 hours from digging the yarn and hook out of my stash to uploading the photos on ravelry. and it is cozy too! six strands thick and cushy, and it has held up well in the first washing.