the hat chronicles continue. i noticed something as i thought about my hat knitting some more. i tend to make hats in the last quarter of the year and there are very few that fall outside that period. funny, huh. 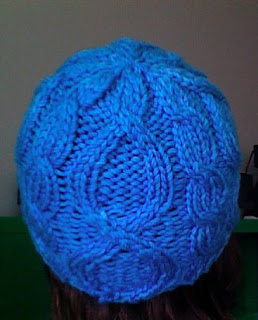 knit in 1 skein of Malabrigo Chunky ("bobby blue", 100% kettle dyed merino wool) purchased at Now and Then on size US 10 DPNs.

i bought this skein to be the pom pom and i-cord on the earflap hat i never knit out of the other skein of darker blue malabrigo. i had this pattern kicking around my queue for awhile and i thought it would be a good back-up gift to have on hand in case i can't find something better for the person i have in mind.

it is a fun and simple pattern. cables rock. 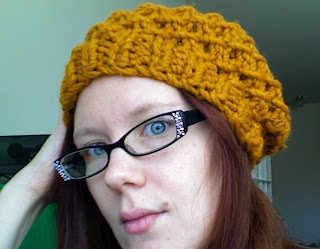 the star stitch was very fun!
i started this when i was in dress rehearsals for Lord of the Flies. there was enough light spill from the stage that i could see the star stitches, but the pattern was easy enough that i didn't have to pay much attention.

the student actors thought i was a super star because they saw me knitting the hat on tuesday night and i wore it on wednesday.

were i to knit this again i would have gone down a needle size for the ribbing because it loosened up with wear and i have had to thread a drawstring through the ribbing and tie it in a bow at the back to keep the hat on my head. eek! 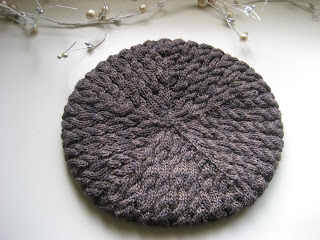 this project started with the yarn. i had. to. have. the smoke silky merino, and i bought enough for the bobbed tam also published in this issue of Vogue Knitting. then i decided the color was not good for the bobbles and switched to the cabled tam. the pattern calls for more yarn so i bought a third skein.

it turned out that i barely needed the second!

this hat is really beautiful, and the pattern is very good, although there is a small mistake in the last couple of rows of the chart. as enjoyable as it was to knit the tam, i will say it had a few tedious moments. most of those were centered around the rows in which every single stitch is cabled and you are working over 240 stitches in the round. those rows were blessedly few, which means on the balance, this was extremely enjoyable and gratifying to knit.

i call the project done, but i am pretty sure i am going to tear back the bind-off and ribbing and reknit it on size US 3 needles and for a few more rows to make a snugger band. this hat has a problem similar to the Aspen Beret.