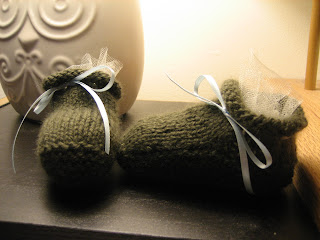 saturday i attended my cousin's baby shower. for the forthcoming bambino, i made a few crafty gifts. not all of them were yarn craft, but there was some of that as well (as always!). first, something we have seen before.

bambino is a little boy, and he will have the cashmere bootees i knit a few months ago. i added a blue ribbon to each to make it a little more "boy" and to help prevent him from kicking them of his little feets.

at the shower we had to pass the bootees around because everyone wanted to touch the cashmere. 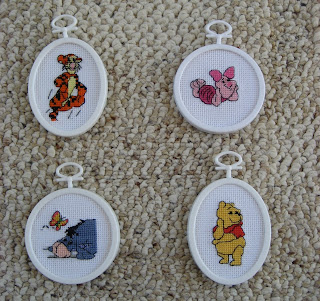 in addition to warming his piggies, i made something to adorn the bambino's nursery walls. jess liked the winnie the pooh gang a lot when we were little, so i decided to make some pooh themed wall hangings. these four little guys are about 2 inches tall in their frames.

very cute and super fun to make.
each one took about 2-3 hours to stitch and frame. i have not done a lot of cross stitch since 2000, so this was a big change of pace for me. i enjoyed it a lot once i got the hang of the technique again. 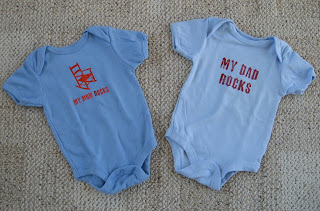 finally, i created a "least common denominator" craft--iron-on transfer. i was at jo-ann's a few weeks back and saw these iron-on transfers and could not resist. super cute on blue onesies. they were a pretty big hit

there may be more shower and/or ohio pictures to come.... BUT! i am entering tech this weekend, so updates will become sparse soon.
Posted by FRM115 at 9:34 PM

What a lovely collection, I am sure they will be treasured