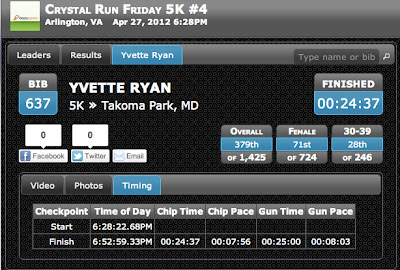 last night i ran the last 5k in the series.  i really wanted to finish the race strong and, hopefully, have my best time.  i did both!!

no friends could make the race either to run with me or cheer, so it was oddly a pressure off situation on that front.  then!  i saw her!  in the second race i had overheard a pair of friends talking about their race pace and this man said of his friend, "she's great.  she does an 8 minute mile."  so in race two i used her as my pacer and chased her fancy newton running shoes for three miles.  she was back this week and i used the same strategy.

i started to feel disheartened after the second mile marker because this woman is a very effective racer.  she runs well for the first two miles and then kicks it in the ass for the last mile.  she walked off and left me last night at the second marker, and i was sure my hopes of beating my own pr were dashed.  my shoulder was aching a bit, but otherwise i felt really good, especially in my legs.  och, but my brain was just everywhere.  closing in on the last half mile i just snapped out of it.  "yvette, you feel great.  what the hell are you saving it for?  run faster." and so i did and i started to pass a bunch of people in that last half mile, which i have never done.  this course has a stupid wide U-turn in the last 150 meters and two (!!!!) different idiots trying to cross the race course (they were not racers) almost took me out.  i actually grazed one of them as i made the final turn and he yelled at me!

at that point i was angry with those jackasses, but when i saw the clock at the finish line, my brain straightened out again...  "forget them!!  sprint for it!!" and so i did.  just having the ability to break into a sprint in the last 50 meters made me feel like i accomplished something.