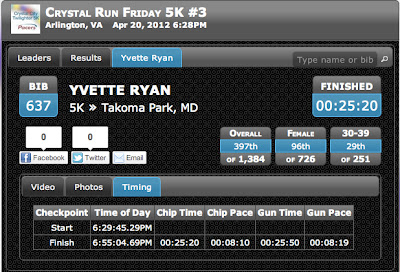 seeing as i am running the fourth race tomorrow, i suppose i should report on the third, right?

i was slow.  yes, i know you cannot expect to have a better race every single time, but it was disheartening none the less.  it was a generally difficult run all around.

first, it was really hot for an april evening.  hot enough that i was in shorts and a tech tee and before reaching mile one i wanted to take my shirt off.  my feet were also sweating like crazy, which makes me very very grumpy.

second, i was really sore because i over did it during the week.  that monday i ran hill repeats as the middle mile of a 3 mile work out and then on wednesday i did 7 miles, with a lot of downhill. (downhill is hard for me, i get scared.)  on thursday i could barely lift my legs to get dressed and walking down stairs was a nightmare.  i was still sore when i work up on friday, so i knew i was going to suck at the race.

finally, i was running on my new shoes.  i like my new shoes, but we are still in our period of adjustment, and the race was only the third time i had worn them.  this week i think i have settled into them a bit more and i have been focusing on my running cadence, which has helped me in so many ways, not the least of which is reducing my calf strain.  someone has a nasty habit of landing a little too far forward on her foot and this makes for very angry calf muscles when running distances.

tomorrow is the last 5k in the series.  they were a useful experience, but i am ready to not spend my friday evenings in crystal city for awhile.  i started running as an experiment of sorts, and having a standing date with a race has taken away some of my freedom to play around with the running experiment because i need to save something for fridays.  last week when i did the 7 miles, at the end i asked myself..  okay...  do you have another 5k in you?  the answer was, yes, i could run 10 miles.  i have 10 miles on the brain now and i will be glad to have the chance to try it out soon.

at this point i have not signed up for any other races until the fall when i have one 10k on the books.  i am very tempted to sign up for one next month in ohio when i am visiting my family.  the cleveland marathon, half marathon, and 10k are the weekend i will be home, and that 10k is looking appealing.